The title says it all, but we’ll get to that in a bit.

Paul and Karen picked me up at my hotel at 09:00 and we set off for Cannich in a drizzle (actually a lovely Peugot).

Soon we were off, with the drizzle (not the Peugot) with us for just an hour.

It was road walk for a few miles until we took a right and then a left onto a small track.

Stewart (2nd crossing) and Lauren (first crossing) in the foreground, Paul to the right and two more, who’s names escape me like flatulence.

The walk on was pleasant, the legs strong and the back in good shape. But my knee was starting to hurt on the downward paths.

A great path through the woods, slightly overcast with a pleasant temp.

As we walked on the knee began to kick in with protest. Quiet at first, like an angry letter to the Editor. But then it escalated to a full-blown riot. Little bits of my knee were carrying placards and torches. Suddenly, I was The Man. The Man, my knee was protesting about. I swear I could hear my knee yelling, “Tendons matter!”

Paul is an excellent hiker and retired. But retired from what? These Brits keep some things pretty close to their pocket.

By now I could hardly walk down hill. Straight and up were somewhat fine (marginal pain) and I could carry on. But then, after climbing most of the day, we started several steep descents. The angle on several was 60º for several hundred yards.

Hard to see but this is straight down.

My knee was in agony. I hobbled down side ways as best I could. The hikers whom we were passing and then passing me gave words of encouragement.

Karen had parked the car at the foot of the trail and hiked back to meet us and joined us about two hours out from the end. After keeping up as best I could, I told them to carry on and I would see them later.

And off I trudged on my own. Along the way you meet other TGOCers and we watch out for each other. And here they come.

I’m walking down the trail like a very old person in pain (Just pretending, I’m really just an old person in pain) when TGOCer #167 walks up to me and correctly diagnosis’s my pain. He reaches into his rucksack and pulls out an elastic brace, not perfect for what I have but it couldn’t hurt.

He graciously give it to me, “We need to watch out for each other, Mate.” The best part of TGOC are the people.

He carries on and I do my best.

The long and the short of it is, a hike that should have taken maybe 5.5 hours, took 7.5 hours. And my knee won, they took down The Man.

This old tree was at the end of the trail, my hiking stick is leaning against it for scale.

As I reached the foot of the trail, there were Paul and Karen waiting for me. I guess when they picked my up hitchhiking, they didn’t know they had adopted me for life, like a bad penny. As fellow TGOCers came off the trail, they had mentioned to Paul and Karen, their mate was in bad shape.

As we drove into town we espied a couple TGOCers and I returned the knee brace to someone who was on the ferry across Loch Ness with 167 and offered thanks.

Karen dropped me off at my hotel for a hot bath and then ice on the knee.

Later that night I went to the Loch Ness Inn. By the by, I am staying at the Loch Ness Hotel. Everything in Drumnadrochit has the words Loch Ness in it. Loch Ness chocolate ice cream, Loch Ness Plumbers, Loch Ness Detective Agency and Pest Control (true). I met earlier a woman named, Kathryn Loch Ness Burnet, a charming girl.

At the pub I ran into Stewart and Lauren, whom I hiked with briefly today, and Paul whom I hike with in 2016. Paul is an American. from Ohio, teaching at the University in Edinburgh, and creating things in biology to save lives.

On my return to the hotel I found this poster: 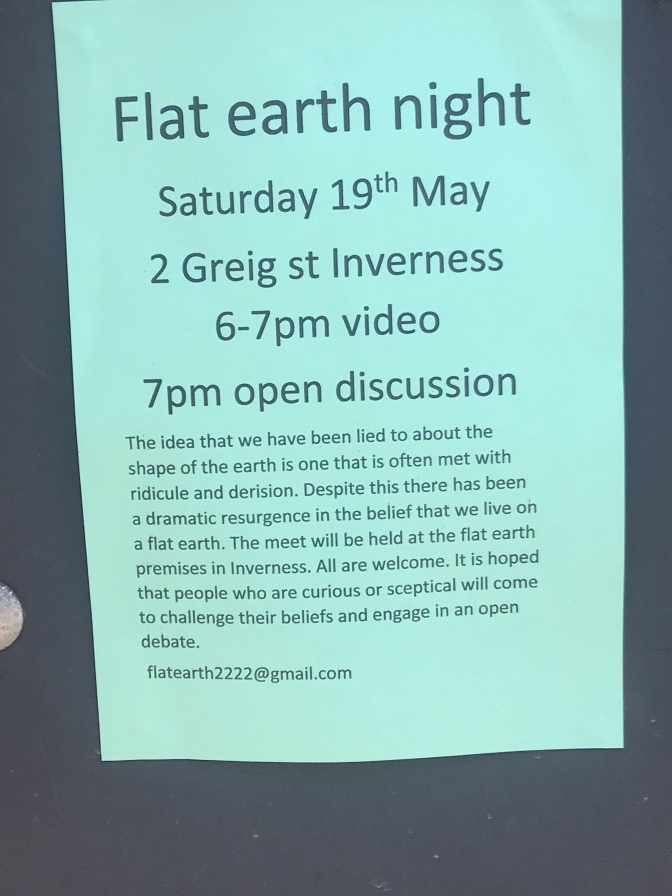 Damn, but I wish I were in town for that. Now it’s also the night of the Royal Wedding. Coincidence or perhaps something darker???

As I mentioned, Walking to Nowhere.

Alright, that’s it. I think I’m done. The knee is throbbing. I walk like I’m 66 years old and from South Minneapolis (damn and I am).

I talked to my doctor in Minneapolis and he confirmed it is Pateller Tendon thingie, sometimes called Runners Knee. His recommendation is to ice it and keep any weight off it or as he said, “Your gonna fuck it up good this time dipstick.” I asked him for a second opinion and he said, “Your ugly.” Doctor Dorsey is appearing this weekend at the Comedy Club.

I’m taking the day off to reevaluate my plight.

This morning Karen was traveling on to Aviemore, as support team for Paul, which would have been my next stop after more wilderness and kindly offered me a ride.

So here I sit in Aviemore, in a pub, next to the river Spey, on a beautiful day in one of God’s gardens, trying to figure out what the **** to do (not so many swear words, my mother-in-law implored).

Whatever I do, any official crossing is over. My knee won. Bernie Sanders, I hope you’re happy. It’s simply a mechanical body thing and as Scottie said on Star Trek, “Captain, I can’t change the laws of physics!” (Scottie, now played by Scotsman, Simon Pegg.)

I will keep you posted. I will figure this out by tomorrow. I will not put myself in harms way, as best I can. But I do need adventure. Danger fuckers unit! Oops, sorry Corky.

4 thoughts on “Walking to Nowhere.”