I call it a holding pattern, bidding my time until my hiking departure this Friday, so shall make this brief.

Left London for Nick & Belinda’s mid morning on the train to Swindon, then by taxi on to Longcot.

Lovely lunch with N & B, and B’s sister, brother-in-law and their three children.

The Boyd’s lovely back garden.

After an extended lunch, yours truly took a nap to better acclimate to the time change.

Then off to the local, The King and Queen for drinks with Simon and Andy, whom we’ve all talked about before and Harold and Heidi, who are married.

Heidi and Harold on the left, then Tony, Simon, Nick, Belinda and Andy.

Harold & Heidi are Norwegian Air Force personnel, staying for an extended visit attending the local British war college. Heidi is a Major, her husband’s superior, and just recently returned from Iraq. Harold is doing a dissertation (I asked him what it was on and he only looked at me and said if he told me he would have to harm me).

Home and to bed.

Today, Monday, is a bank holiday and we are having lunch with Peter and Sareeta Jordan. 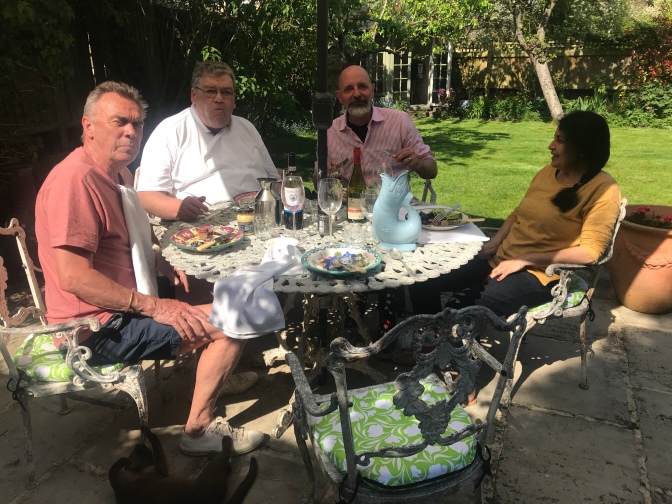 Peter, Nick TMS and Satina in their backyard.

Peter is a pretty famous photographer who has traveled the world for Time Magazine, UK. Lunch was Italian and delicious.

Below is a photo Peter took back in the 80’s.

He got a call one day asking if he could show up at 10 Downing Street for a photo shoot. He asked who he was to shoot and the caller said President Reagan and Prime Minister Thatcher. Well, he decided to take the assignment.

The photo was for Reagan’s birthday and the PM wanted it to be with Churchill (as above).

Reagan asked Peter who he worked for and Peter replied Time. “Well, you’re one of us!” Regan replied and Thatcher immediately responded; “No Ronnie, he’s a Brit, he’s one of us.”

PM Thatcher’s signature is faded but there, right next to the great communicator’s (his given title but not be me).

Getting antsy. Ready to hike.

One thought on “Holding Pattern Update.”