And if only I could have checked out. But there is no escape. No easy way out. No calling Dad or clicking my heals together.

I woke up with everyone else around 6:30 – 7AM and packed up. I had my food hanging from the rafters so no mice could enjoy it. Not that I really enjoyed it. I’ve not been eating. I left around 7:30AM with a few ahead of me and a few behind.  Memory will fail me on this, because that is the great thing about memory, we forget rather quickly the pain.

I walked down the trail, aware that much of it had been washed away in the Spring meltdown.

Maybe a mile down the trail, it was gone completely and I found Phil and John climbing up the embankment, hand over hand, 50 feet. Below it was a sheer drop to the rocks and the roaring stream. Now it as my turn. I had 30 pounds on my back, and a whole lot on my mind.

After a backbreaking effort, I made it to the top. Where I celebrated with a prodigious bowel movement. I literally had the crap scared out of me. It’s really rather cleansing.

The weather was in the mid 40ºs and raining, but lightly.

The trail marched on and I followed. My friend Lindsey had said it was two hours on the Glen Fishie trail, an hour on the bog and an hour on the trail to White Bridge, the end of this segment. And I believed him. 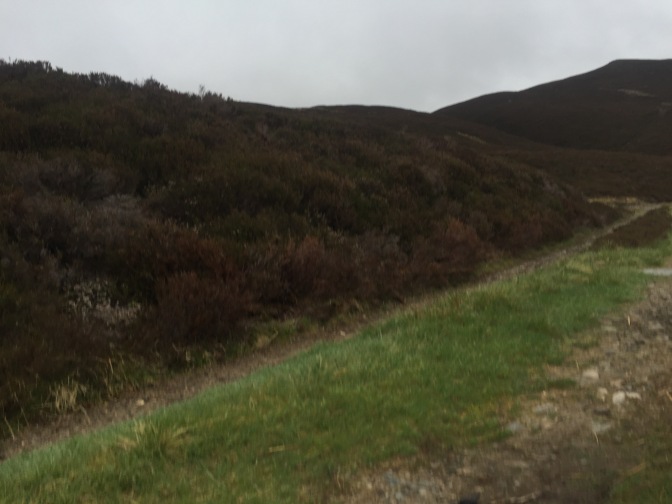 By now the wind and the rain were picking up. The ground dead wet and as in most days, I forded more streams than I can remember. My back was killing me. I would hike for 500 yards, bend over and rest and then walk another 500 yards. My hands were so cold I couldn’t feel them. I’m a Minnesota boy and have put up with my share of cold. But I had never been this cold for so long before.

To help my back, I wold stop every mile to remove the pack and then bury my hands in my armpits to warm them. I had a rest day waiting for me in Braemar and I wasn’t gong to miss it. That is what drove me on.

The rain came down in pelts of wet coldness. The wind was so strong, it would move me as I walked. I wasn’t eating or drinking much and would pay for that later.

As I walked across the moor, my boots would sink into the bog up to my knees.

I finally thought I had made it to White Bridge, only to find out two hours later the bridge I crossed was not White Bridge, but a bridge. Once I reached white Bridge, I had another five miles or so to hike to my B&B. I was determined to make it. Plus there was no other alternative.

There is more to this but just imagine in a repeating pattern: Cold, Wind, Rain, Muck, A Feeling Of Being Lost, Isolation. At this point my eyes were so blurry from the rain, I couldn’t see. Until I realized that my eye we were shutting down as well (later to find out due to de-hydration and no food). So for a recap, my back was out, my eyes were out, my hands were numb, my feet were cramping and wet and I had no clue whether I was heading in the right direction. Interestingly enough, my penis was just fine. Mr. Ed was happy and cheerful. So I had that going for me.

Finally, 8 hours later I came out at the head of Braemar. My location was isolated and I was concerned I was in the right place. I decided to call the B&B and get a triangulation on my location. My eyes would not focus and my fingers would not work but ten minutes later I managed to phone up Katy and explain my predicament. She generously offered to come get me and I said how long will that be. She replied less than five minutes. Katy asked me how she will recognize me and I said I was the only white guy in black pants and orange jacket there.for that matter, I was the only one there. I was a singular. An outlier. I was in my mind, Shackleford, come back from the dead.

Katy picked me up in six minutes. Katy, in her mid 30S, prior to opening the B&B with her husband, Julian, had been first oboe for the Scottish National Orchestra.

In four minutes we were at the Calaeter B&B. Katy & Julian, perfect I keepers they are, gave me a beer and pointed me toward my room and a bath.

I’ve just re-read this for spelling errors and can see that it downs not completely capture just how miserable I was. But like the mumps, or chicken pox, or a horrible blind date, it is nice to have the worst hike out of my way.

2 thoughts on “Finally, my worst day of hiking ever in my life. “Check, please!””