I have to end with Frank, thank you Mr. Sinatra.

The Zipper and Velcro Banquet was a blast. Sue & Ali, who produce this amazing event were spectacular. Russ was his own inimitable self, congratulating the first crossers and admonishing those who have done it more than a dozen times. 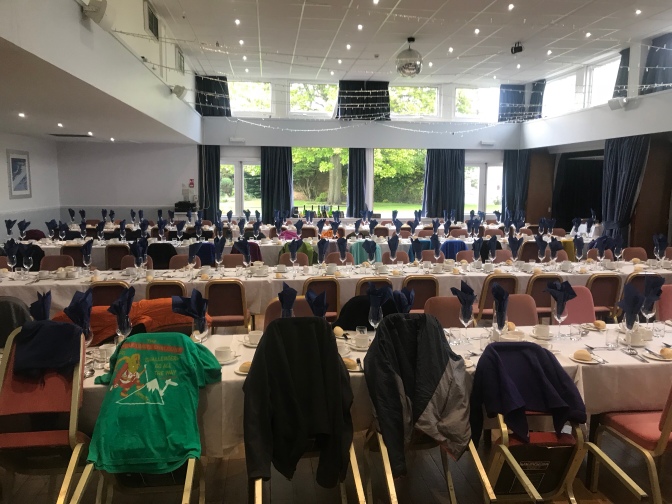 The calm before the storm.

Russ, a gifted walker, talker, and all round good chap.

Emma Woolf and the Foul Weather Alternatives, practicing for their later performance, with Lord Elpus in the foreground, enjoying it immensely.

The famous Alan Sloman in the foreground with Lord Elpus and name I forget, who none-the-less, shall be leading British reform.

The room 200+ strong. The most exclusive club on earth (with the possible exception of whatever Kim Jong Un has to offer).

That’s it. I sit in a club at Heathrow, waiting for my flight to board, with first a train from Montrose to Aberdeen, a bus to the airport and a flight to London. It’s back to reality. Back to earth. Back to wearing cotton.

In retrospect, it was the Best Crossing Ever. Thus endeth the sermon.

One thought on ““I planned each charted course, each careful step along the byway…””