I’ll come back to that but first of all, once I was back on my feet and at Braemar, I finished my hike. 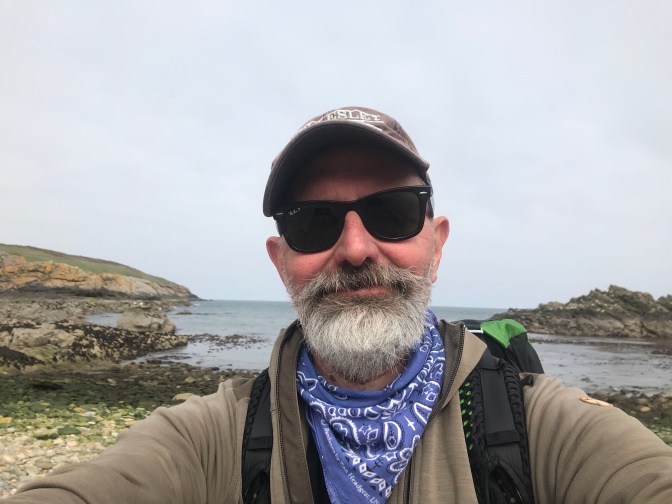 Yours truly, on a cove on the North Sea, Portlethen.

I left Banchory at 08:15, knowing it was going to be a long day. It was overcast and perfect for hiking. 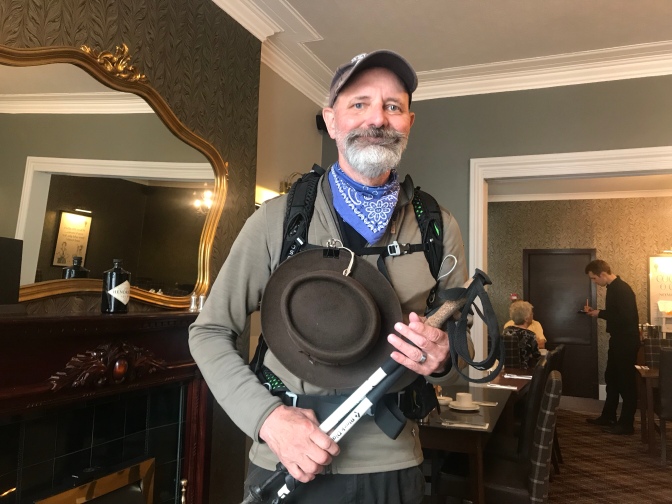 Ready to hit the trail.

The weather on this crossing had been phenomenal, with literally no rain the entire trip. Compare that to last year when it rained on me every day. First timers to the challenge this year, have no clue just how great it was (“Best weather in 18 years!” Russ).

I was following the Deeside Way, which is an abandoned railroad bed. A train had run along this from 1868 until 1966.

It offered a level hike with little chance of getting lost. 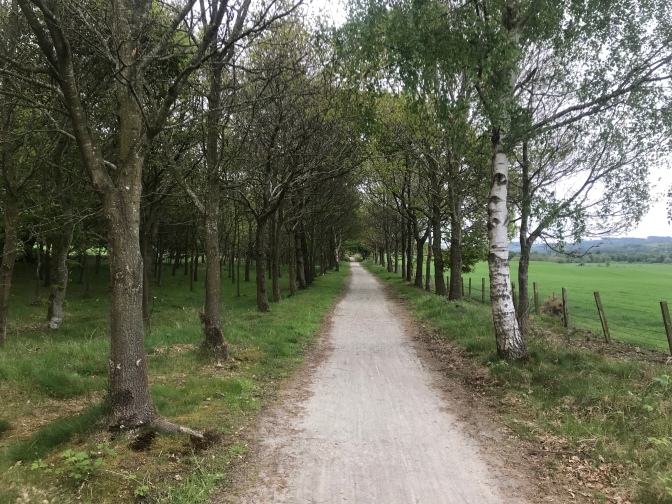 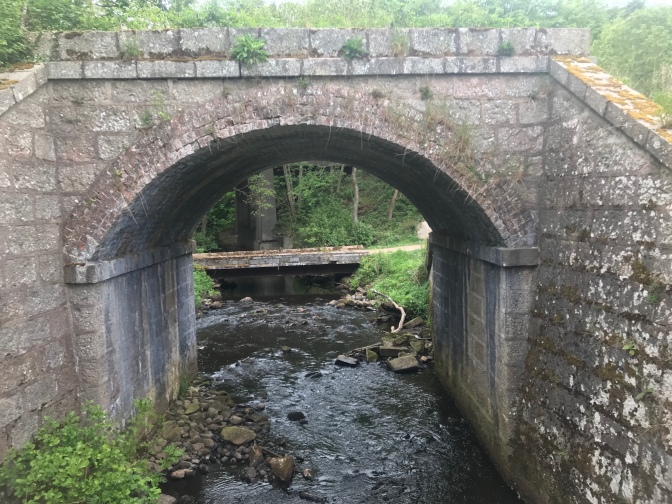 It was a straight haul down the Deeside to Aberdeen, my new final destination. Only when I looked at the map, the last five miles were through Aberdeen itself.

So I made another audible and half way to Aberdeen, at Peterculter, I took a right and headed overland to Portlethen. I’m glad I changed my route, Mick didn’t and hated the last bit. 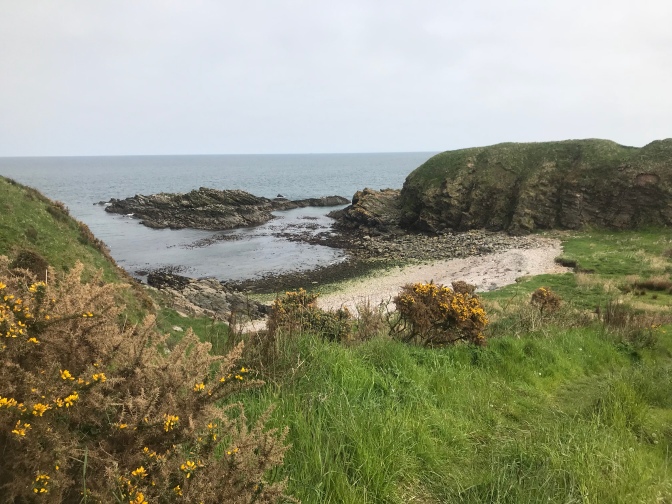 A cove at Portlethen my final destination. 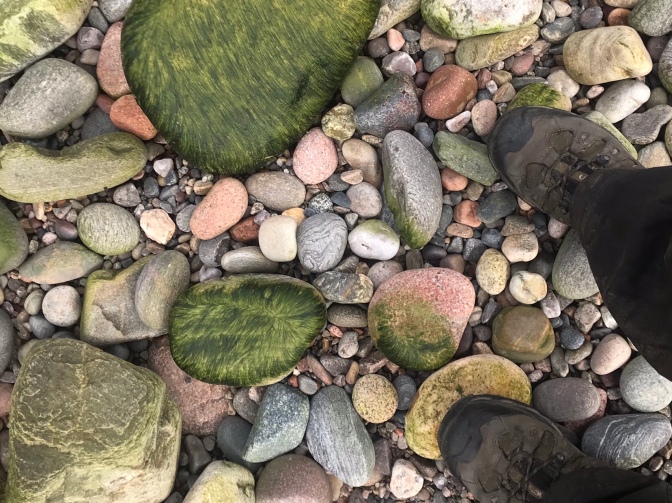 The rocky (and slimy) shore. 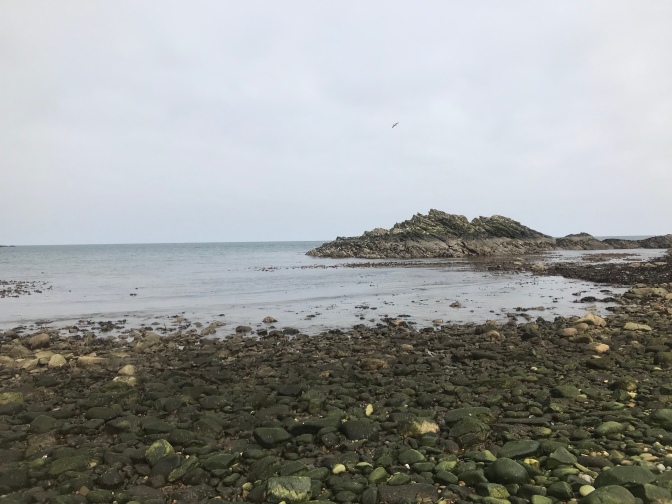 I passed another TGOCer, headed to the cove, who said there would not be a train to Montrose for hours but there was a bus stop, a mile or so away. I hiked there, only to find it was on the freeway and with no indication it was the right bus stop.

I decided to hitchhike but the cars raced by, with nowhere to be picked up safely. Across the freeway, was a side road with cars lined up to get on the busy road going my direction. I raced across the freeway and tapped on the window of the first car for a ride. Damian, an oil and gas guy, in a brand new Audi SUV, gave me a ride to the Stonehaven bus stop. As we passed the time, Damien said the oil industry is coming back and thinks $80 a barrel is the optimal price (good to know) that helps the public and the industry.

I thanked Damian for the ride, and at the bus shelter, looked at the posted schedule—with Thomas, who was also waiting for a bus—helping me out. It turned out I had a 30 minute wait. “Let me buy you a pint, mate,” said Thomas and dragged me off to the corner pub. 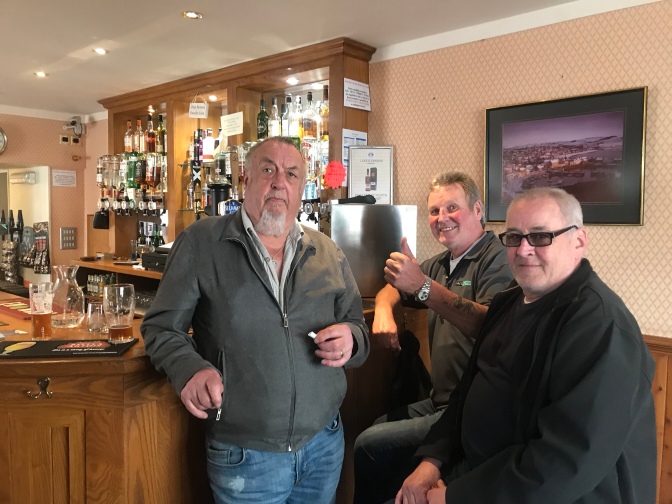 Thomas, Brian, and another patron.

Thomas was a retired engineer, formerly from Glasgow, “I’ve heard of Minnesota,” he’d said. And then called up his number one daughter to come collect him. “No need for the bus for me.”

Brian, also a Glaswegian, was an oil and gas guy who had worked in just about every oil producing country on the planet. At 68, Glen was looking good. “I’m a Harley man, Thom. An’ my bike (a three-wheeler) takes first place in every show I go to.”

The day was getting cooler and the pub was warm and inviting. But my bus was on its way, so I said thanks and as I walked out the door, a young guy overhearing the conversation, said “Go Twins,” on my way out.

I climbed on the bus and found the Challenger who had mentioned the bus originally, sitting next to me. It turns out the bus stop on the freeway was the right one after all.

I made my way to Montrose and checked in at Control Central, received my goody bag (minus my certificate of completion) and headed for my room and a bath. 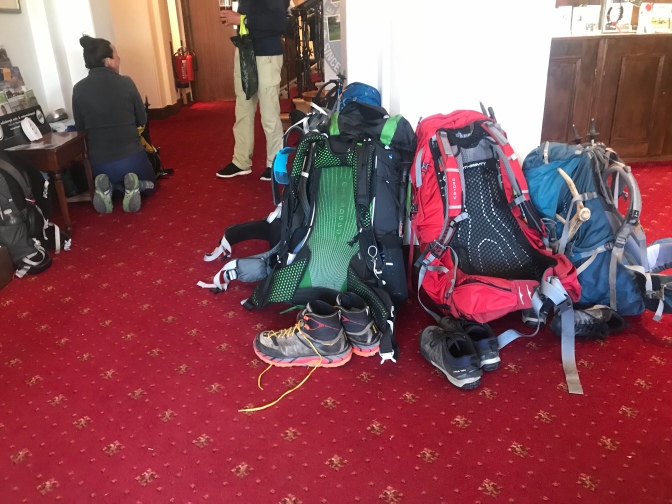 The lobby at the Park Hotel, more rucksacks than you can shake a stick at. I tried and my stick broke.

I made my way down to the hotel bar, and it was packed to the gills with Challengers. Drinks were poured, stories flew and the bonhomie could be felt to through road weary bones. I might also mention, the place had that peculiar odor only 12 days on the road can produce.

A little later, I mentioned to Humphrey. I was going out for Chinese food and did he want to join me. And that he did, along with Shep.

Humphrey, is a designer who has traveled the world and you are hard pressed to find a trail he hasn’t been on, or a dive in any country he doesn’t know. Hump has pulled together a band for tonight’s entertainment. More on that, when I hear them.

Shep is a Set builder, and until a few years ago, had a huge company that built most of the sets for the movies you’ve seen, produced in the UK (and as he says, a bunch of movies you’ve never seen). 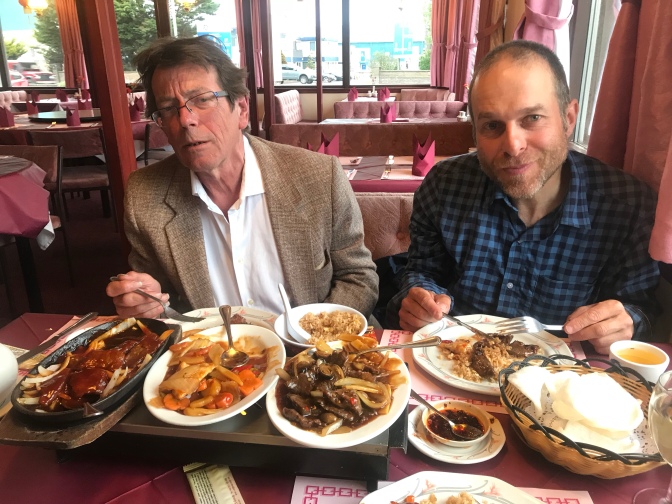 Humphrey, Shep, sizzling Beef in Black Bean Sauce, Chicken Tao, Beef in Curry with Peppers. My third time to the Peking Palace in three years. I dream of this place along the trail. The next time you are in Montrose, I highly recommend it. If you don’t like it, I’ll pay for it.

All that is left is the Velcro and zipper banquet tonight. A room full of man-made fabrics, Velcro, zippers and the best people on earth. More on after it happens.

But, back to The Best Crossing Ever.

That was my mantra for this trip, as I prepared for it over the winter months. I believed it would be my last and I wanted a right tough challenge (and there are tougher crossings than mine). I planned as best I could. I had my route down cold. I had enough bandages, pain killers and blister packs to outfit a small pack of boy scouts.

But I didn’t plan on my knee going out. I did not plan on a body part not working like it had for 66 years.

So it was the worse crossing ever because I didn’t make it. I failed. I tried and I failed.

But it was the best crossing ever because of the Challengers I hiked amongst. Those who did make it. Those who cheered me on, offered knee braces, hot tea, and stories. Of the 300 who started off this year, over 50 had to drop out. One in six, including yours truly.

But right now, more than anything, I look forward to the Velcro and Zipper Banquet. More on that after it happens.

2 thoughts on “The Best Crossing, Ever.”