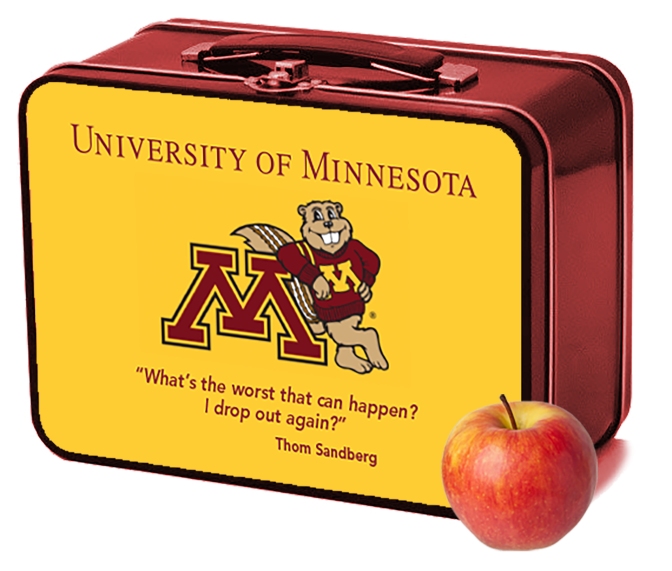 After 40+ years working in the business of making things up, I am heading back to college.

In the very early 70s I dropped out of the University of Minnesota after two years and started working in advertising (actually having started at BBDO when I was 16) as an art director and designer in Minneapolis, London, Istanbul, Tokyo and back to Minneapolis. After working for a couple local agencies I started my own agency with a couple partners and eventually sold it to a major agency in town. After a few years I bought part of it back.

Now, thanks to deeply discounted tuition for old people, I am enrolled once again at the U of MN hoping to finish my final two years with a degree in history.

Thomas Wolfe may have written, “You Can’t Go Home Again” but it’s pretty easy to go back to the U of MN.

I first heard about the basically free tuition for people—who remember when politics were sane—on television news and it struck a chord with me. Business was winding down and I had been drifting in life for three or four years, listlessly going through the motions of life. After thinking about it for a week or so I called the main number for the U and said, “Hello, I am old.” After confirming that I was listlessly going through the motions of life, the guy told me to visit the One Stop Service at either the Minneapolis campus or the St. Paul Campus. He suggested St. Paul as it is less busy.

A day or two later I parked my car on the St. Paul campus and loaded a parking meter with two hours’ worth of quarters. I found the office easily and with hat in hand I said, “Hello, I am old.” After confirming that I was listlessly going through the motions of life, the woman at the counter got her boss to help me.

Rick took down my name and contact information, the year’s I was at the U and said he would find my records and get back to me in a few days.

That all took ten minutes.

I sat in my car for an hour and fifty minutes, after all I paid for the parking.

Two days later Rick called me with my student ID number and I was off and running. My number was so old they had to add a zero in front of it.

I set up and appointment with a College of Liberal Arts counselor, Dan, who helped me fill in the classes I need to take for my CLA required classes and then met with the dean of the history department, David, who helped with those requirements.

Below are the classes I will be attending (and this time I will go to class) for 14 credits:

That is about it. I purchased my books in July and have read all of them (with the exception of 150 pages of Anthropology). Naturally I will re-read them as we go through chapters in class.

Wish me luck. I will drag you along. Also, this site is still a bit wonky. I will clean it up when I figure it out. But I’ve got to study because I so want to make the Dean’s List. Oh, wait, I don’t mean the Dean’s List for academics, although that would be nice. No, I want to get on that party animal, Dean’s List. I hear he knows where the best keggers are.

One thought on ““What’s the worst that can happen? I drop out again?””