I should have known it was going to be a hard day, when walking to the start of the trail I saw this sign posted:

Last night it was Herman who gave today’s entry, its title. And Lord, was he right. Today is a 20 mile hike and a 1270 meter climb on one of General Wade’s MIliraty Roads. These were built in the mid 1700’s to keep the Scotish tribes in line. There are a number of them and while some have been cleaned up to service powerlines, most are a challenge.

I started off around 9AM and followed Ava and her boyfriend, Kenny and another guy named Nigel. We walked up a mile or so and then they took a left and a right and went straight up the side of a hill, through rough growth for a couple hundred meters. By the way, for the most part I will continue in meters, it’s easier. Think of a meter as a yard with croissant nailed on the end. After all, the Frnch invented it.

(This guy came out to wish me luck)

No way around it. The hike was going to be long and hard. And my back now was kiiling me. I could maybe hike a half a mile before I had to take my pack off and rest my back. Every topping of the trail showed more trail to climb ahead. Did I mention my back was on fire? 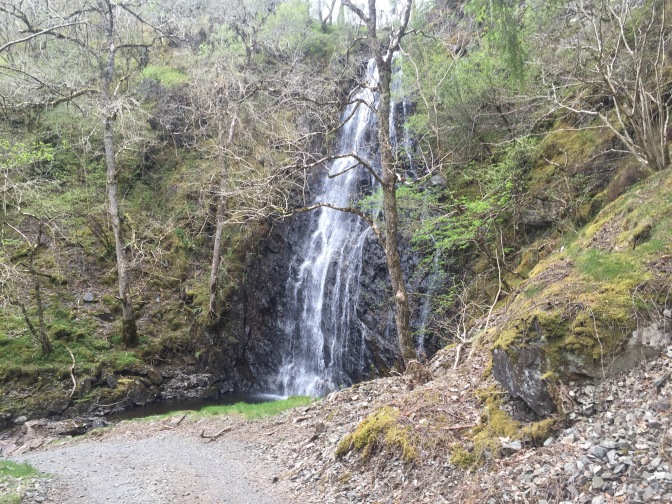 There were these breathtaking views everywhere. Thank goodness there was something else to take my breath away besides the weight on my back. 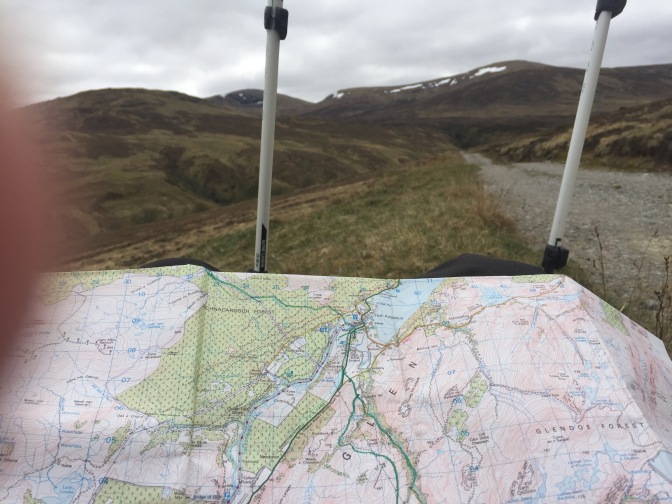 Double checking I haven’t made a wrong turn and ended up London.

Finally, and let me just type that again, finally I arrived at the summit. You can tell you’ve summited when you see a pile of rocks

I can safely say, there is nothing more delightful than seeing a pile of rocks. Wouldn’t it be great if we all gave eachother a little pile of rocks when we reach our goals? “You finished that report? Have this pile of rocks!” “What, you washed the kitchen floor? The rocks are on me!” That sort of thing.

The hike down was faster but as Russ had called it earlier, it’s all pigs in a blanket, which is either a difficult descent or a cocktail appetizer.

For dramatic purpose only, really not that much snow

I arrived at Melgrave Bothy around 6PM, whipped. Now just so you know, a Bothy is a trail cabin, originally set up for sheep herders to crash at whilst tending their, yes you guessed it, sheep. There are 100s across Scotland. This one was great with a fireplace snd a roaring fire in it, thanks to Andrew, a Prince of a guy, who was just there for fun. He was traveling round round the odd climb. He managed to drive in with his dog, Meg, and had the fire going. Is there anything more lovely than this at the end of the day:

Now it was Howard, Nigel, Russ, Herman, Frank, John, Andrew and me staying at the bothy, eating freeze dried food and talking politics, life, the challenge of course and favorite hikes. These guys know them all. Andrew, the consummate host prepared fresh chicken frittatas, to be washed down with beer and wine. Several of us shared several flasks of single malt.

All in all a perfect night. I set up in a room to share with Howard, who mentioned he might snore a bit. Which I found out was an enormous understatement

I climbed into my sleeping bag and was trying to fall asleep when I smelled the most horrific odor. I looked around for the source and discovered it was me.