I left the bothy around 8AM with John and we walked in the cold morning air. Breakfast had been oatmeal and tea (as most mornings).

The sun was out and the road was mostly down hill. My back is still hurting, and it is slowing me down. My pack is 25-30 pounds and that is not that heavy. John pulled ahead and I walked on my own, finally arriving at the Garva Bridge, where I found a caravan parked and a guy inviting me in for coffee. I’ve read Stephan King books about guys like this and said hello and good-bye. Until John poked his head out and since it was still attached to him, I came over. As it turns out, Ian was with TGOC and offering tea, coffee and cakes in the morning and whisky, beer, soup and sandwiches at night. Our timing was off so we settled for the tea.

Ian had done the crossing 20 times.

We bid good-bye and set off again, with John out walking me in a mile or so. Again, my back, it hurts. I need to stop every couple of miles, take off the pack and stretch. But the trail was magnificent. 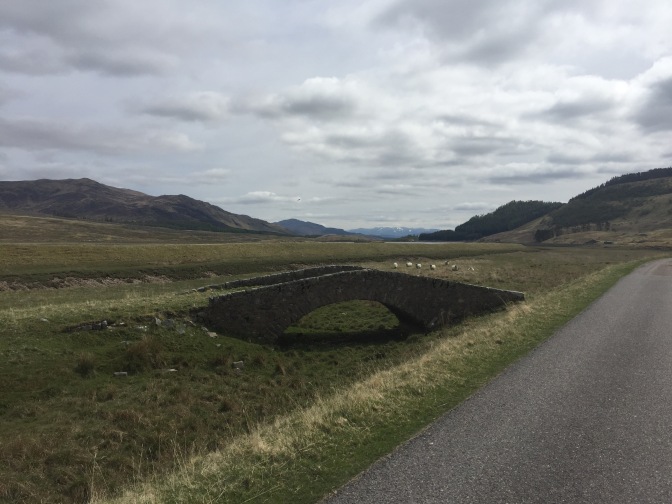 36 kilometers and a 500 meter climb later, I arrived in Kinguisse. Not a bad day, not a good day. But a day closer to the Eastern shore.

And my feet? Well what I like to think are usually in perfect shape are looking like this. Not a bad photo, but in real life, I think they might make you vomit. At least I like to think so.

Instead of the article on TGOC, why oh why couldnt’ it have been an article driving through the cheese country of  Southern France? Merde.

One thought on “Why am I doing this?”