Margaret, David and I broke camp and were on the road by 07:30. Parked not far from us was Dot and Doug, still in their tent, recovering from the night.

We hiked on may 4-5 klics (kilometers for those who don’t watch James Bond) to the new bridge, which crosses a small river, ahead of the old bridge which was taken down.

This is the river, although no photo of the bridge, which was maybe six feet wide, made out of 2X12s. Across the bridge it was bush whacking through the bog to find the connection from the old bridge to the track. Yes, a bit mucky.

Okay let me just interrupt from the sequential entries to say that as I mentioned before I am in Kinlosch Ronnach, two days ahead for what i am writing about. But where I am, they have been playing Frank Sinatra and right now he is singing “God Bless America.” You gotta love that. And the playlist is interspersed now and then with American Christmas songs.

Today is 26k with 500km climbs. And the weather up until noon has been constant rain. 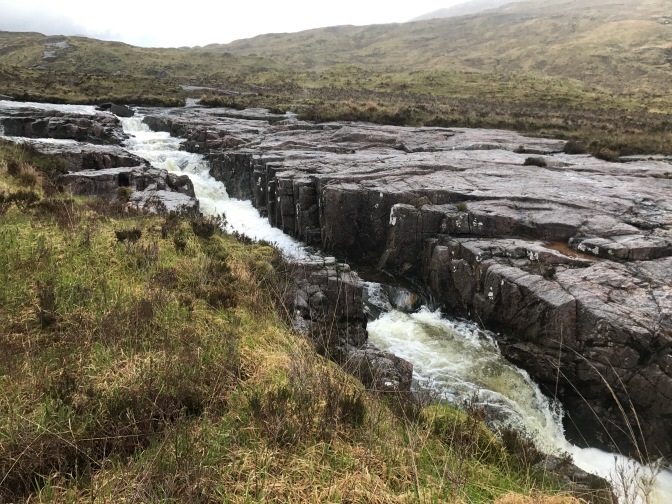 The bridge crosses this (above). 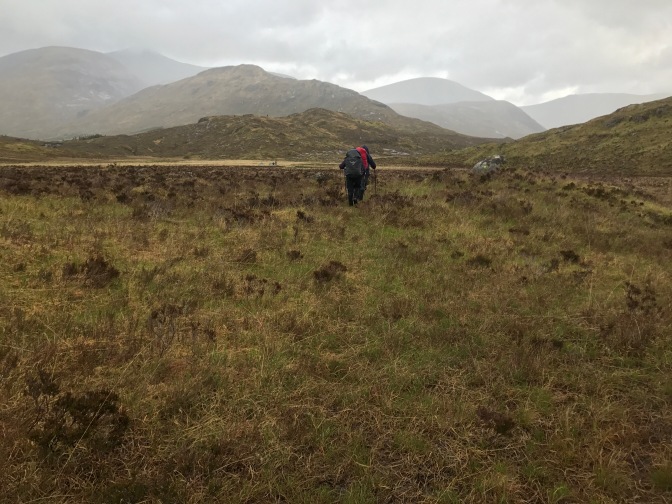 Margaret and David ahead of me (of course). 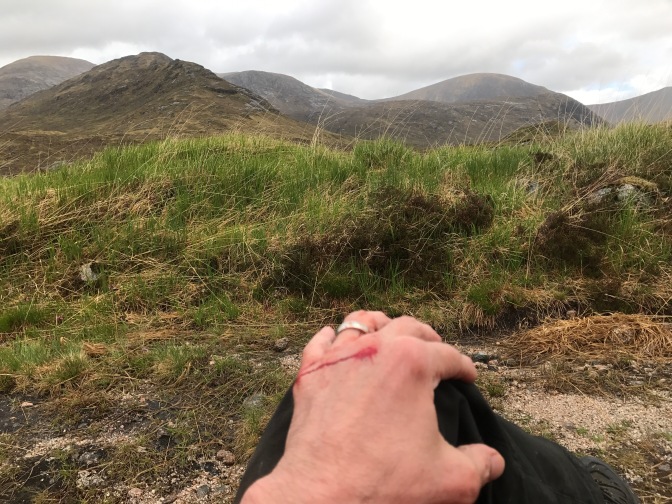 Ended up stepping into a bog up to my knees and this is my reward.

Stop for a little energy. Hard to see but it is pouring rain. But not too cold.

A pause to reflect (on what I have no idea).

Margaret and David, carried on and I met up with them at the trail head for the West Highland way, an old drovers road from 1803. Just at the gate was Eddie Nelson, from the outskirts of Glasgow. Eddie used to hike quite regularly 35 miles through the hills. He gave up cycling when he turned 80. Now he makes sandwiches, tea and biscuits out of his own pocket to raise money to stop the spread of polio. “Bill Gates, matches whatever I raise!”

Bill is just finishing packing up his vehicle. “It’s got to me fun, whatever you do, and I throughly enjoy this.”

He was off to finish at the oldest way house in Scotland, where a load of hikers and bikers were going through. Needless to say, a very cool guy.

Entrance to the West Highland Way.

As I called this entry, if you don’t like the weather just wait, is true. This day–and I do not exaggerate–cycled from sun filled skies to pouring rain 20 times. Often within ten minutes.

After several clmbs, and a great decent I made it to the Kingshouse bunkhouse. Hot shower, clean sheets and good commeraderie of the other TGOC’rs there. Ready for a good nights sleep, I was in a room with three others. And, well, they all snored. It was like a Phillip Glass concert, or something Spike Jones would invent (and now, “Ode to a Disturbing Noise). I did the best I could. Which wasn’t much.