(Update from Pitlochry, Thursday, May 18)

In short, it didn’t. Most of the day was one outburst of rain after another.

But first an update on sad news I forgot to mention. While watching Eddie drive away to the Clachan Inn, up walked Dot and Doug. Only Doug was dragging and Dot had on the big pack. The day before, Doug being the protective husband he is, cautioned Dorothy to be careful on a particularily slippery part of the trail. Only to moments later, take a big tumble himself.

Doug banged up his knee somehitng fierce. In his description of it, I was reminded of an Easter ham. They had only another mile to hike to their hotel and were going to ice the knee and determine in the morning. If they could go on.

The other sad thing is, I killed a frog. Not my intention, but he didn’t croak his presence. So  I stepped on him (unintentionally) and croaked him. Had he croaked, he wouldn’t have croaked.

Let this be a cautionary tale, let people know you are there. In line at the store, online at home or lining up for an important meeting. The world responds to those who croak.

Anyhow, the day started out gray, cold and raining, but a light one. And with no sleep, I was already one of the walking dead.

I left for this day with Owen, from Dundee, who worked in medical research. A great guy who’s accent was so thick, I only nodded and said yes or no, dependent what I thought was appropriate. Oh, and Owen was the leader of the snoring band last night. But I can’t hold that against him. I tried, it didn’t work. 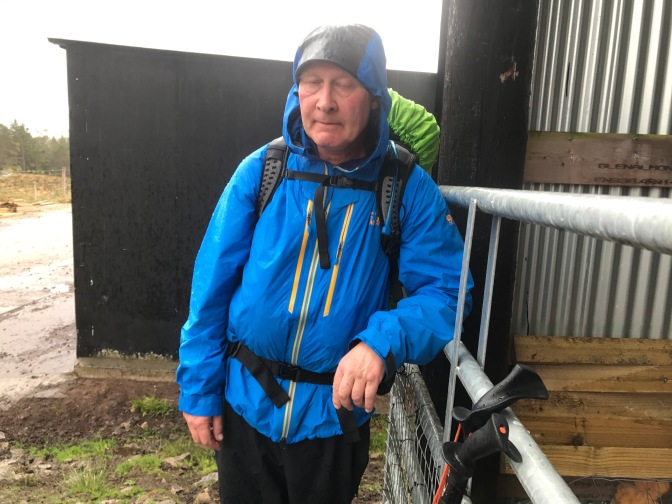 Owen, Randy to hit the road.

(Again, let me interrupt this narrative with where I am right now. A pub in Pitlochry, with a fiddle/bagpipe playing guy and a woman playing saxaphone, doing Gaelic music. Beyond this in the next room, on television, is a darts competition with thousands of people at the stadium watching. One guy playing is the size of a Buick with a pink Mohawk. It couldn’t be any better.)

We set out down a working track toward the moor. It was three or four miles on the track until it stopped and the only way ahead was across the moor.  It was four or five miles which meant it would be hours. Crossing, there really wasn’t a true path, just a suggestion to follow the power lines. It is tough hiking but I enjoy it the most.

We made it through the moor/bog/wet spot and walked on a forest track, which was pleasant and led us into Ronnach Station. 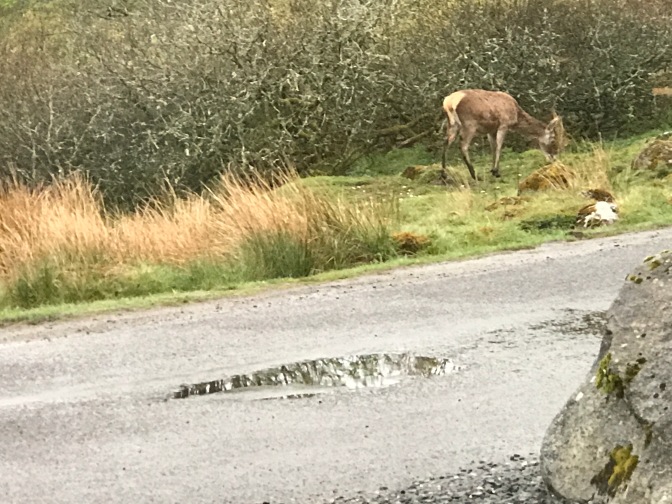 The guy above was enjoying dinner across the from hotel, as was I.  All in all, 19k with 394m climb.

More later. Too exhausted to think.