Tuesday, May 16, to Kinloch Rannoch

Another gray day, with a bit of drizzle but not bad. Had breakfast at the hotel and then hit the road around 08:45.

I was out of town (really, absolutely just a train station with an eight room hotel) a few miles when I hear a car coming up behind me and not looking back raise a pole to say hello and croak my presence. I hear the car slow down, pull up beside me and see it is Scott, the owner of the hotel, holding my sport coat. “Thought you might need this.” He said. Not to look like a complete idiot I told him it was an elaborate test to see how observant the hotel was and they had passsed with flying colors. He smiled, called me a twit under his breath, and drove off.

The weather held most of the day and the road was pleasant and windy, dipping down to Loch. Rannoch. 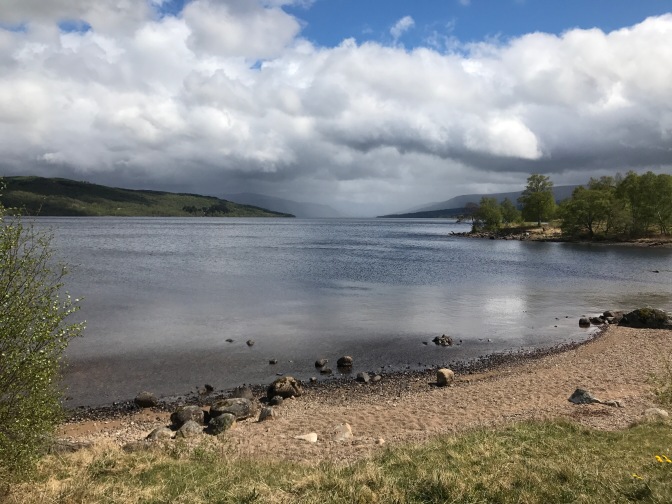 As I was arriving at my hotel, hours later, it started to pour one more time. No need to walk into any establishment and look like anything but a beleaguered refuge from a Gortex convention.

Up to my room to dry off and wash clothes. Lunch in the lobby and with no TGOC’rs around, I figured dinner would be on my own. Only five minutes later Russ and his two Dutch traveling companions X (haven’t caught his name yet) and his 20s something son Melvin showed along with Peter (a Canuck, who works in oil and gas around the world). Peter had the year before canoed out of the attic circle with three friends, covering several hundred miles in two weeks. They saw it all, had a ball and ate freeze-dried food for two weeks. The canoes were the blow up kind, screwball keel, but they did the trick. But freeze-dried food for two weeks?